Last weekend, I was in Florence. I had such an amazing time that at night I wrote a detailed account in my journal of everything I’d seen and heard and felt, as if trying to distil the essence of the days into a permanent record. I didn’t want to let go of those moments. One week later, and once again I’m climbing into bed on a Sunday evening. Am pleasantly tired and looking forward to sleep. I feel content and at one with the world. It has been a blissful weekend; full but not too full, productive but relaxing, busy but not hectic. I have done so much that is worthy of comment and reflection. Yet I haven’t written a jot in my journal over the last few days. There is as much to say as last weekend, but for some reason I haven’t put pen to paper. How much do we miss out on by not giving the same level of attention to our “ordinary” moments compared to our “out of the ordinary” ones? What perplexes me more is why it hasn’t occurred to me to try to record this weekend too, as I really don’t want to let go of these moments either. I want to capture them and keep them in my heart forever. 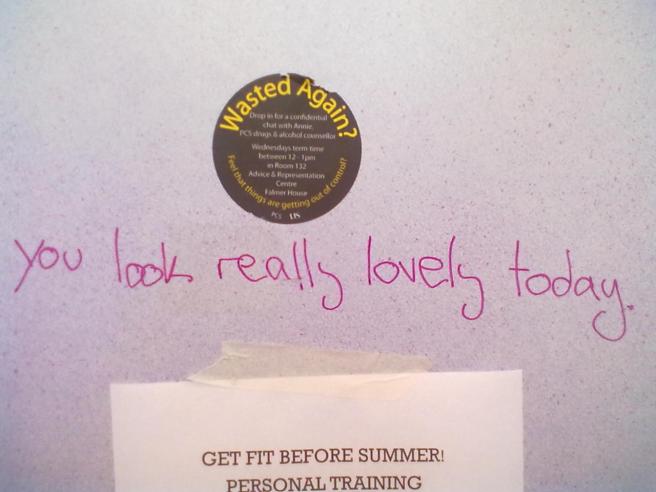 The handwritten note in the middle is my favourite piece of graffiti ever.  Spotted this morning (Friday 20th May 2011) in a toilet at the University of Sussex, which is near Brighton – and it brightened my day!

Today the phrase “Reduce, reuse, recycle” seemed to be my mantra. I cut a large Post-It note into thirds as I didn’t need it to be so big. I got 3 printer cartridges refilled. Returned 3 library books. Bought a Mooncup (a form of reusable sanitary ware-&possibly the purchase of the year in terms of how excited I am about using it!). Purchased a lovely navy shirt from a charity shop (turns out it’s actually more aubergine than navy, but lovely nonetheless). Recycled various bits of paper, including several receipts for cards etc that I’d picked up today. Then my last action before bed was to swap the contents of my handbag to a canvas bag that I’m beginning to feel is a more “freeing” option, especially for a long day out as tomorrow will be (off to Brighton with work, then meeting some friends on the way back). On the side of this canvas bag is a print of the Barbara Kruger sinograph, “I shop, therefore I am”. I can’t help but wonder what today’s consumption choices say about my changing identity as a consumer. So I’ve thrown in my new £20 lipstick for good measure.

Tuesday night: my “other” bed.

Wednesday night: my “other” bed.

Thursday night: my “other” bed.

Tuesday night: my “other” bed.

Wednesday night: my own bed. Heaven.

, sang the cast of Grange Hill back in the 1980s. It’s hard to say no, though, and I don’t mean simply in relation to illegal substances as the pop song did. All too often we end up agreeing to things we don’t want to do just because we can’t bring ourselves to utter that two letter word. Or we commit to something that we cannot possibly do to the best of our ability because we’re overstretched. At best we might feel a bit annoyed with ourselves; at worst we let others down or jeopardise their efforts because we’ve said we’ll do what we cannot follow through on. I’m terrible at it: so often I’ve wanted to kick myself for agreeing to things – even putting myself forwarded to take on more and more, be it at work or at play. However I’m learning how important it is to step back and say “No” – I can only truly follow where my heart and soul are leading if I allow that word to help keep me going in the right direction. Without it, I go wandering off on all sorts of tangents. Knowing that I had a busy May lined up, I managed to say no to an invitation the other week, one for the end of the month that I knew would end up being actually quite hard work. Since then – when the person I said no to was totally understanding – “just say no” seems to have snowballed. On Friday, I said no to myself about a self-imposed goal that was stressing me out. Yesterday, I used the variant of “I’m afraid I can’t” and found myself unburdened of another prospective task that was worrying me eight months in advance. Today I said “I can’t commit to anything else” in relation to organising something else. This last use of no left me feeling revived and with sufficient freedom to happily reply to the next email, asking me to follow up another task that I began a while ago. Because, of course, for everything we want to say no to, there’s something else where we want to just say yes.

It’s Monday night and am feeling bouyant. Jubilant, even. Life just feels good at this moment. I hadn’t expected to feel this way right now. I thought I might feel a bit anti-climatic. Having had an amazing weekend in Florence, where there’s something hypnotic about the place that’s inspired so many over the centuries, I feel invigorated creatively. Although a bit of an energy slump early afternoon put me on tenterhooks, as if some terrible fate was about to befall me, a decent lunch soon sorted my blood sugars or whatever the problem was, and even a really late finish at work ended up feeling pleasant and (crucially) satisfying. Perhaps most central to my current level of contentment, however, are the plans literally just made to meet up with a good friend who I’ve not seen for a few months on Friday evening. The week may have only just started, but having something to look forward to at the end of it is good for anyone’s soul.

I’m re-reading Judith Levine’s “Not Buying It”, her record of a year long project to buy only the absolute essentials. Levine writes especially well about the ways in which consumption lubricates social interactions, with buying things – whether they be a meal together or cinema tickets – being central to our relationships with others. If we no longer consume as much, or start to consume in different ways, how does that impact our social position and connections with others? This question weighs heavily on my mind a lot, and my time in Gatwick airport this morning underlines my sense of increasing disenchantment. The whole place, ostensibly a holding bay for travellers, is like a mecca to shopping and booze. Aside from sitting still, there’s nothing one can do except buy stuff, or browse things that one could buy. And where else is it considered normal to order a pint of lager at 930?! Watching the numerous groups of stag and hen dos starting the weekend as they mean to go on, I admit I felt a pang of envy. I don’t think I’ve ever had such a relaxed relationship with either money or booze as they seemed to be exhibiting. And the sense of camaraderie amongst a large party is somewhat lacking when you’re travelling alone. They were buying and sharing, being joyful, communal, alive. As I looked around where I ate my lunch, I saw there were several lone travellers such as me. We were there, just less visible. Probably spending less. But living just as much, in our own quiet way.