Last week I featured the blog that I knew from my academic days and today I thought I’d showcase another.  This time, it’s the writings of Dr Charlotte Mathieson, a lecturer in English at the University of Surrey.  In particular, I wanted to flag up her recent fascinating reflections on Victorian attitudes to suntans.  Seems funny when there isn’t a scrap of sun in the skies above me but we can live in hope for a good summer ahead!

If I’ve known Charlotte’s work for a long time then my next recommendation is at the opposite end of the scale.  One of my newest friends is an amazing woman called Mary, who is a vet in the US.  She’s recently been involved in an amazing project to help save hundreds of cats in Brooklyn.  The project, and a quotation from her, featured in the New York Times.  It is such a fascinating story!

My sister-in-law alerted me to this great article on the BBC website which highlights a public health campaign in which a charity used an image of damaged lemons to demonstrate the signs of breast cancer.  So clever, so effect.

I’ve also been alerted to two very different blog posts about Japanese food over the last week.  Having spent three weeks travelling the country last year, this is a subject that I am extremely interested in!  The first is a beautifully design infographic from ‘I Love Coffee’ about how to eat sushi.  I’m wondering if seeing this had a subconscious impact as I had sushi for lunch *and* dinner on Tuesday! 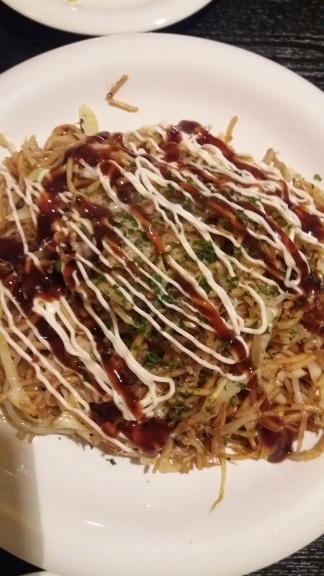 The second post, from the Roads and Kingdoms site, is a long read about ‘The Second Most Famous Thing to Happen to Hiroshima‘ and it focuses on the regional speciality of okonomiyaki.  Blood delicious albeit perhaps not the most photogenic food, as my snaps (above) from our trip suggest!

One of my goals for 2017 is to become a minor expert in the soap opera EastEnders. Yes, really.  I’ve watched most of the UK soaps on and off over the years, often depending on the viewing habits of my housemates.  After researching the genre during my MA, I developed a new found respect for the way they work, particularly their willingness to blur the boundary between the fictional world on the screen and the ‘real’ world of the actors outside of it.  A particular poignant example of this happened this week as Coronation Street actor Kym Marsh depicted emotional and distressing scenes of having a still birth baby – a situation that she had experienced in her own life some years ago.  The Huffington Post published a thoughtful reflection on this.

And finally, this week’s viral video feels like a much welcome celebration of immigration and diversity in a world that seems increasingly divided.  It is actually an advertisement for Australian lamb but you’d never really notice that!  It perhaps sweeps rather optimistically about the country’s colonial past but still it’s a heartwarming message as we move into dark days the world over.  Ironically you have to go through another ad to get to the ad, which you can view here.

For more from me straight to your inbox, sign up for my monthly mailing.  It includes exclusive offers and giveaways! Every single subscription makes a real difference to me and my work.