‘For some the night is always darker –
for them the skies of dawn are bluer too.’

I came across this quotation, scribbled
on the back of a business card, when sorting through some paperwork at the
weekend.  I first read it many moons ago
whilst researching for my PhD.  It is
from a short story called ‘Whistle in the Dark’ by Gabriel Dundas, which appeared
in Woman magazine on 26th
January 1963.  I have only a vague
recollection of the plot.  According to
my notes, it is set on a farm.  Kay is
the younger sister and is back from college for the summer.  All her friends are doing a drama course, live
in a warehouse and talk about the fringe festival at Edinburgh.  Kay wears make-up and high heels when
visiting the farm assistant, a young man who has been to college and is looking
for his own farm.  She realizes that she
loves him.

Pretty standard women’s magazine
fiction.  I didn’t end up writing about
this story in particular, but could have done a nice little summary of what its
themes and motifs meant in the context of the time.  However historical analysis wouldn’t have
communicated what struck me about this story when I stumbled upon it in the archive.
What made the story stand out – what made
me write the opening line on a business card and tuck it away in my personal
possessions – is what Kay’s father tells her later on in proceedings.  He says, ‘The sky is bluer for you, and the
dark blacker. You live harder and you love harder…. But you’ve got to learn,
Kay, to whistle in the dark.’

‘The sky is bluer for you, and the dark
blacker. You live harder and you love harder…. But you’ve got to learn, Kay, to
whistle in the dark.’

At the time of the story’s publication,
Woman was the best-selling magazine
in the UK, with a circulation of over three million copies per week (that doesn’t
begin to cover the secondary audience – all the daughters, sisters, husbands,
friends etc. that would look at a single copy).
How many of those millions of readers also read those words from Kay’s
father?  Did they touch any of them in
the way that they did me?  Do they speak
to you at all?

The words may be as clichéd and
formulaic as the rest of the story, but something about them resonated deeply with
me during what was a difficult time in my life.
I’d long felt that there was something fundamentally wrong with me: that
I felt things (good and bad) more strongly than other people; I struggled to
live with highs and lows; everything was too much – I was too much.  To suddenly find acknowledgement that other
people (even if fictional) were like that was a balm to my soul.  I was not alone!  Others too felt the extra intensity, the
bluer and the blacker.  What relief!

Years later, I still use Kay’s father’s
words as a framework for understanding how I perceive the world.  I’ve learnt to accept that for me (but not
necessarily others in my life) the sky is bluer and the dark blacker.  I live harder and love harder, with both the
joys and pains that this brings.  And I’m
slowly learning to whistle in the dark.

Tell me, what lines from fiction have
guided you?  What’s spoken to your
soul?  Have any quotations become
mantra-like in your mind?  Alas the comment
function here still isn’t working but posted below are ways to join the
conversation on social media.

I hope the sky is bluer for you today. 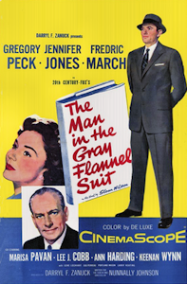 I’m currently reading Ali Haggett’s Desperate Housewives, Neuroses and the Domestic Environment, 1945-1970 (Pickering and Chatto, 2012) for the Bulletin of the History of Medicine.  Without wishing to pre-empt my review, it’s a great book full of fascinating examples.  Haggett’s discussion of The Man in the Grey Flannel Suit (p.21) particularly caught my eye.  She astutely observes that this book (1955) and subsequent film (1956) were part of a broader trend of critiquing suburbia and the mass market conformity of the post-war decades.  I had never heard of the film but it piqued my interest because it echoed the title of a pattern featured in Woman in 1960: ‘The girl in the grey flannel dress’ (19 March 1960, p. 13).  It is not clear whether the pattern name was a deliberate reference to the earlier film, but it is unlikely that the staff writers were not aware of it.  It is tantalizing to imagine what their thoughts were: were they trying to evoke the film and if so, why?  Did they share its socio-cultural standpoint?  Were they adding a gendered dimension to its critique?  Or did they just think it was a good pun?  As is so often the case with researching periodicals, we cannot possibly know.  There is no way to find out the thinking behind the hundreds of small decisions that went into producing each issue of a magazine, yet we researchers may spend hours (nay, weeks and months!) grappling with a single sentence, trying to figure out what lies behind the words themselves.  Coming up with some kind of answer to all my questions would probably take more time than it would to actually make the grey flannel dress itself.  Maybe I should give it a go.

This evening I am running a two hour session on women’s magazines for my local council’s adult education service.  I can’t remember at what point I thought that developing a whole new talk to deliver to a whole new type of audience in the last week before Christmas was a good idea but despite end-of-the-year fatigue, I am looking forward to it.  Most of all, I’m relishing the opportunity to discuss women’s magazines in a really “big” way with no limits on topic or time period, something I’ve never been able to do before (this was a big factor in accepting the offer).  However, because of this vastness, I’ve wrangled a lot about how to structure the session so that it doesn’t just degenerate into “Here is everything I know about women’s magazines”.  I’ve gone with focusing on the different factors that shape such publications (publishers, editors, advertising etc), trying to mix group work, analysis and anecdotes.  I had originally planned to use Prezi for the first time but decided this was too much of a risk (especially as I don’t think I’ll have internet access).  In the end I haven’t even used PowerPoint as I don’t want to overwhelm the audience with visuals.  Instead, the publicity posters requested attendees bring a magazine along with them so people have a focus to look at and a concrete example to consider as we move through the session.

I am also taking a pile of old magazines in case anyone doesn’t bring one of their own.  From this pile, I’ve picked out a few to hold up and talk about at certain points, including the first issue of Clique, my latest obsession.  When sorting through what to take, I came across some old Christmas issues of women’s magazines from the 1950s.  Leafing through them, I was struck that whilst we tend to bemoan the season’s commercialism and hyped up idealism as if they were a recent phenomenon (think John Lewis’ picture perfect advertisements), actually these trends have a much longer history.  I mean, who doesn’t glam up like this 1954 Woman cover for their office party?!

And never mind the Boots catalogue or the perennial “What to buy the woman in your life” lists that populate Sunday supplements throughout C21st Decembers, this 1954 advertisement for Harvey Nichols in The Queen‘s “Christmas number” certainly peddles some  cosmetic gift sets (there’s a fair bit of bling on display too, presumably also available within the store). 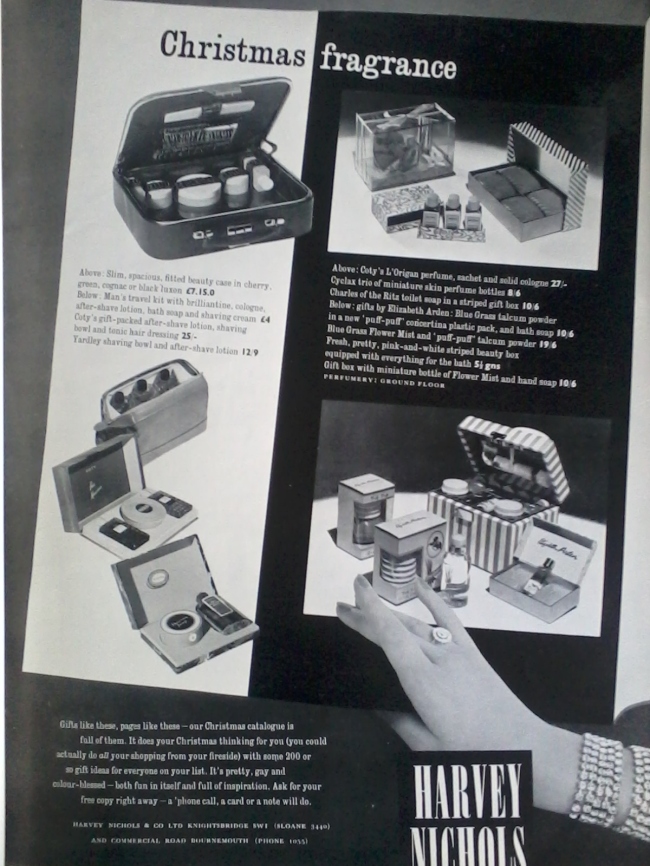 These images of Christmas past, taken from a year when the last vestiges of rationing had only just been lifted in Britain, bought to mind an even older comment from George Orwell about the festive season: “Christmas is forced on a reluctant and disgusted nation by the shopkeepers and the press: on its own merits it would wither and shrivel in the fiery breath of universal hatred; and anyone who looked back to it would be turned into a pillar of greasy sausages”.  Retailers and the media pushing their Christmas agenda onto an unwitting public?  Was it ever thus?

Merry Christmas to you all.